May 08, 2011
It's been some time since I started to think on this post.
Basically, every time I hear people talk about forms of energy, or saving energy, or Green Energy or the like, I wonder if those people have the same understanding of Energy I have. Also, when I read how many calories a chocolate bar has, again I think about a proper definition of Energy and its implications.

Without further introduction, here is my question: What is Energy?

From a pure physics definition, Energy is the ability of a physical system to perform work. Work in turn is intended as a force acting along a distance. All this was described by Sir Newton 324 years ago, in his Principia.

An object is capable of storing Energy because its particles are taken to a position (requiring Energy to do so) and will be able to release that Energy later. Imagine you raise an object, then let it go. That's your Force x Distance on the way up stored in the "Potential Energy" and transformed to kinematic Energy when the object gets in motion. Electricity  in particular (maybe what most people think of when talking about Energy) is a more complicated form of energy, because it's about electrons (particles floating around each atom) moving along conductors. The Voltage relates to the force of the electrons, and the Current is somehow related to the Distance. Heat as a form of energy is associated to the vibration of particles, and other forms of energy can be described in similar simplistic way.
The energy is embedded and associated to the mass of the system (as expressed 106 years ago in the famous E= m * c^2, where c is constant - of course).

Only making changes to the atomic composition of the matter (ie atomic fission or fusion) the consequent loss of mass is transformed in energy. In all other transformations the mass remains constant, therefore the energy cannot be created or destroyed, but transferred from a system to another. We are shifting energy from here to there all the time or from one form to another, but we never create or destroy energy.

Potentially all forms of energy can be transformed into one another, although some of them are more difficult to obtain - being heat a common form of "leaking" as a low-entropy form of energy. This means (and all physicist out there are laughing at my simplistic explanation by now) that when transforming electricity into light we loose some energy in the form of heat - so using electricity to produce heat purposely is actually very efficient but it means wasting a lot of energy that was lost when transforming something else in electricity.

Also, heat is also always "positive", so cooling down means actually extracting energy (remember it cannot be destroyed, so you have to find another way of pushing it out!). As this is not as easy as it sounds, we end up using even more energy to dissipate heat (in other words, Air Conditioning is probably the biggest waste of energy). The key to green architecture is to lower the heat production, by reducing the amount of transformations of energy that will create heat as a by-product, and find ways to assimilate heat and convert it to some other useful form of energy.

The implications of this are quite important, because if our facade is "greener" because it bounces off the solar radiation, you are just adding solar gainance to the building next door or contributing to the heat island around your building... but if you are adding a tree before your building or a green wall, you are transforming that energy into wood/mass instead, and getting rid of CO2 in the process. Even more, in winter that tree will let the heat through! 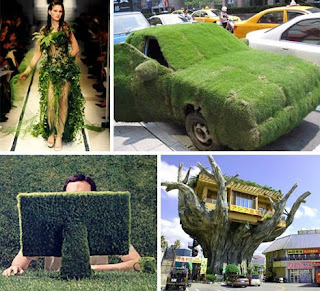 Lastly, about a month ago I went to a ski trip, and recorded my tracks using a GPS (showing off my android phone, of course). It gave me an interesting calorie count, and I started to think how was I spending my energy on the slopes. My conclusion is that when I was sliding down it was gravity and not breakfast calories that was pushing me, so all I was doing was dissipating the potential energy my body had stored getting higher up in the mountain on the chair-lift. My body heat, my muscles aching, were moving my body up and down as the instructor kept repeating, and my energy was moving the snow to turn or stop. At least in theory, the faster you go the less energy you use, but I doubt that's what Cardio Trainer was recording...
In any case, here's a link to one of the tracks... which is really cool!

Popular posts from this blog

Ñ in a blog-post

August 17, 2015
Back on the saddle after a long silence, this time bringing a list of books that have kept me busy... is this a good excuse for not writing blog entries??? With a deadline for this afternoon I cannot spend a lot of time describing each book... yet I want to push myself to communicate some of the mind-opening good reads I came across recently. Most are not new books, and probably you will recognise them. Without further introduction, here's a list of books about maths, with a twist: Godel, Escher, Bach: and eternal golden braid by D. Hofstadter The_Emperor's New Mind by Roger Penrose In Pursuit of the Unknown: 17 Equations That Changed the World by Ian Stewart Introducing Chaos, a graphic guide Art and Physics by Leonard Shlain Things to Make and Do in the Fourth Dimension by Matt Parker So, these are some of my current and past reads. Have you read them? Any recommendations down these lines? In future entries I will explore books about design and programmi
2 comments
Read more

Read in another language